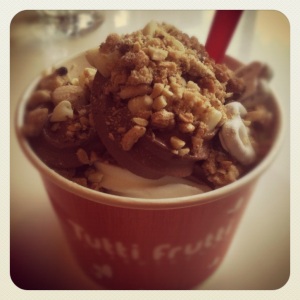 While in Squirrel Hill checking out Taza 21 my cousin and I decided to get some FroYo. We have been to Razzy Fresh in the past and considered going there. I talked him into trying Tutti Frutti instead because I had never been yet. What a mistake! Going into Tutti Frutti the yogurt machines are hidden in the back. The decorating was modern but I felt like I it was decorated for a teenage girl more than a frozen yogurt shop. I fill my bowl with Death By Chocolate, Peanut Butter and TF Original. The Death by Chocolate & Peanut Butter were alright, but TF Original was AWFUL! If you want something that actually fights against your taste buds that would be it. My cousin thought it might be better by itself with fruit, I’m thinking probably not but it could be like tofu and take flavors away from whatever its paired with. By the time I got halfway through the yogurt I was highly disappointed because now TF Original contaminated the peanut butter and death by chocolate. If you are looking for something sweet in Squirrel Hill a few doors down is Rita’s or walk further down the street to Razzy Fresh, either would be a better choice than Tutti Frutti.